These are some of the questions that population health scientists and stakeholders debated at the third annual population health conference funded by the Robert Wood Johnson Foundation.  Improving Population Health: Now, Across People’s Lives, and Across Generations to Come convened October 2-4 at the University of Texas at Austin, and by all accounts it was a resounding success. 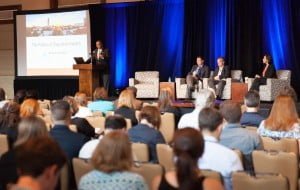 See more highlights and a slideshow from the conference.

Many thanks to the Planning Committee!  The members include co-chairs Dorothy Daley (University of Kansas) and Michelle Frisco (Penn State University), Lorna Thorpe (New York University School of Medicine), Dawn Alley (Centers for Medicare & Medicaid Services), Jenn Beam Dowd (Department of Global Health and Social Medicine, King’s College London), Carolyn Cannuscio (University of Pennsylvania), Merlin Chowkwanyun (Columbia University Mailman School of Public Health), Mark Hayward (University of Texas at Austin), and Justin Denney (Washington State University).  Thanks also to the volunteers who staffed the IAPHS table and all those who contributed to the active IAPHS communications effort during the meeting.  See the long list of everyone who contributed here.