Can we reconcile politics and population health? Can we navigate the disparate funding streams, programs, and systems to truly make people healthier? Are we all on our own when it comes to healthy choices, or should we focus on improving systems?

Sharfstein reminded us that two schools of thought run through the discourse: first, population health does its best work with politics out of the picture, and second that some health problems (climate change, immigration, gun policy) are inherently political and therefore require political leadership. 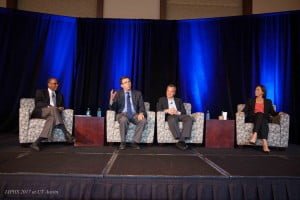 Either way, the panel agreed we need policy to be evidence based—though that path isn’t always straightforward. Sometimes results will come further downstream, which presents additional challenges in making the case for culture and policy changes. And different audiences may interpret evidence differently, as it often happens with gun policy and e-cigarettes. “First we have to agree what healthy choices actually are,” said DeSalvo, addressing the idea that not everyone embraces the ideas of built environments and healthy communities in the same ways.

Strong political leadership, particularly at the national level, can help create the culture change often needed to follow the evidence and translate that into policy. Obama helped make this shift happen.

DeSalvo also spoke about the need to move toward policy even with data that’s admittedly messy or imperfect. She cited the opioid crisis, for which some data are a couple years old, yet the need for public policy and intervention is dramatic and urgent today.

The panel discussed how more people and more people are becoming aware of the need to groups to come together and try to new approaches, such as Accountable Communities of Health. Considering private capital and business models may be of benefit. Citywide efforts are also playing a bigger and bigger role, including public health work in Denver and even in New Orleans (New Orleans has created smoke-free areas, for example.) Approaching hospitals directly might help the system move from volume based to value-based payments. 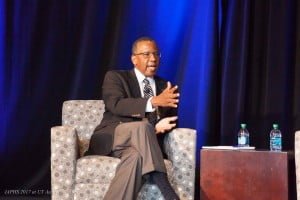 Local efforts and community-based efforts are key, stressed McClellan. Local work can also bypass issues of money driving some of the federal debates over funding and priorities–and can help keep the people—the ones that population health aims to help—more closely involved and invested. Digital tools can also play a bigger role in helping people make better choices.