Theory, Measurement, Inference, and Action: How to Advance Research on Neighborhoods & Health?

Where people live matters for their health: this is a fundamental conviction among population health scientists, but how much do we really know about how and why this is true? At the 2017 meetings of the Population Association of America, held in Chicago in late April, a panel of distinguished scientists discussed how sociological neighborhood research informs research on population health.

The two sociologists on the panel were Rob Sampson, Professor at Harvard University and a leader of the landmark Project on Human Development in Chicago Neighborhoods (PHDCN), and Chris Browning, Professor at Ohio State and the leader of the Adolescent Health and Development in Context study. Ana Diez Roux, Dean of the Drexel Dornsife School of Public Health and an early and prolific leader of research on neighborhoods and health, provided an epidemiologic perspective.  Kate Cagney, Professor at the University of Chicago, expertly moderated the discussion. 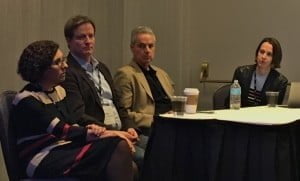 Neighborhood Impact on Health Is Complex

What do we know about neighborhood effects on health?  Most scientists agree that places have properties that transcend the individuals who live in them and that these properties – be they social cohesion, the mix of commercial and residential uses, or safety – matter for health.  Underlying this simple concept, however, are a host of complex issues that need to be addressed for research to effectively guide place-based programs. If we think of neighborhood effects as simple and contemporaneous impacts of where people live, we are missing an important part of the story.

Interlocking institutions, policies and local practices underlie neighborhood effects in complex ways. Many of these factors operate at different levels or may not seem related at first glance – for example, local school policy, corporate decisions regarding factory locations, and social ties among neighbors. How can we account for the dependencies among these factors and levels in understanding the specific mechanisms responsible for effects on health?

Moving Between Environments Can Increase Stress

Neighborhoods have often been treated as the site of relevant “exposures” for their residents, but people often spend large amounts of time in other places. Browning’s study shows that when they are not at home, youth are twice as likely to be in a different census tract than the one they live in.  Movement outside of the neighborhood of residence, whether for conducting daily business or in moving to a new home, can create important flows and networks linking different areas to one another, Sampson argues. These flows may be driven by differences in the availability of resources such as schools, food stores, and health care across local areas, and they have implications for the kinds and variety of environments people are exposed to.

Browning argues that experiencing a variety of environments over the course of daily life may increase stress. For example, for minority youth who live in segregated neighborhoods, venturing into majority-dominated areas may prompt vigilance and code-switching behaviors. For black youth in particular, he finds that having daily routines that take them further from home is associated with cortisol indicators of elevated stress.

The picture becomes even more complex when you consider that neighborhood effects on health can operate on different time scales.  Consider the immediate effect of a violent encounter, as opposed to the long-term effects of chronic stress. Integrating neighborhood research with an understanding of how health trajectories develop over the life course, in response to shocks and persistent exposures to places, is a new and important, challenge for neighborhood research.

These complexities of multi-level influences, human mobility, and temporality lead scholars like Diez Roux to advocate for the adoption of systems science to understand neighborhood effects. This kind of approach allows researchers to develop dynamic models of the many mechanisms contributing to neighborhood effects on health, including hypothesized interactions and feedbacks. They can then manipulate the model to answer questions about how the overall system operates, and observe outcomes when the system is modified to mimic the impact of potential interventions. (See IAPHS – Growing Inequality; Bridging Complex Systems, Population Health, and Health Disparities for related content from IAPHS)

New approaches to measurement also offer intriguing opportunities to better examine the complexity of neighborhood influences. Sampson’s PHDCN introduced the methodology of videotaping urban streets as a strategy for measuring neighborhood characteristics. Google Street View now offers a mass-scale version of what PHDCN did to characterize the physical and social environments at the block level. Machine-learning algorithms can be used to efficiently analyze the wealth of data increasingly available.

The Adolescent Health and Development in Context study uses smartphone technology to map out “activity spaces” —  the set of places individuals move through as a result of their routine activities. The study combines methods such as experiential sampling and GPS location tracking with data from social networks.

New visual tools can be used in conjunction with electronic transactions data to further characterize local areas. For example, the Boston Area Research Initiative has transformed data on calls to the Mayor’s hotline into a map showing the geographic distribution of resident concerns.

“Big data” approaches like these are alluring, but it is still unclear how best to integrate them into neighborhood research or how to assess their strengths and weaknesses. An important step for future research is to innovate while concurrently critically evaluating potential measurement strategies, using all the tools available.

At the PAA session, all the panelists noted debates among neighborhood (and other) researchers about the relative merits of randomized controlled trials (RCTs) and observational methods. While everyone recognized that RCTs are a useful part of the toolkit needed to measure causal effects, all agreed that they aren’t sufficient when used alone. In order to understand causal processes, researchers need multiple, complementary approaches, including experimentation, observational studies, and systems science.

Investigators are increasingly moving beyond demonstrating place-based effects to testing theory-based hypotheses about specific mechanisms linking place to health, and this beneficial trend should continue. Diez Roux argued that it’s also important to investigate how processes may vary for different health outcomes and different populations, and at different levels of aggregation. Browning and Sampson both pointed out that better understanding selection processes – or how and why people come to experience specific local conditions –  will bring us closer to being able to make causal claims. Along with better measurement of exposures, this is  an important step in modeling neighborhood effects.

Diez Roux noted that observational approaches, systems  science, and experimentation all complement and inform each other.  Experiments provide strong causal evidence, but they are not always generalizable and are poor at identifying the mechanisms producing effects. Observational studies can speak to both of these issues and can draw on quasi-experimental designs and many modeling approaches to buttress causal claims. Systems modeling forces researchers to be explicit about hypothesized mechanisms, including those that link across levels of analysis, and to ask different questions. For example, what is the plausible impact on health inequalities of a strategy to subsidize the location of supermarkets under various spatial patterning scenarios?

Finally, Diez Roux argued for the integration of action into research approaches. Communities are experimenting with new place-based strategies to improve health – why not study these strategies as they happen? If theory suggests that certain neighborhood attributes affect health in certain ways, can we change those attributes, show an effect, and study the mechanisms that produced it?  Can we design studies that are sensitive to unintended consequences of community interventions or policy changes – for example a zoning change that improves walkability but increases noise, light, or air pollution, undermining the health of residents in other ways? Building bridges between researchers and policy makers or community groups can help to both inform those strategies and identify opportunities for research.

Gossip as Data An Interview with Kristin Harper