Syndemics and Population Health: A Q&A with Anthropologist Emily Mendenhall

This week, IAPHS member Kristin Harper interviews medical anthropologist Emily Mendenhall (Georgetown University) about a recent series of articles on the concept of syndemics that she spearheaded in The Lancet. In these articles, Mendenhall and co-authors explore what syndemics are and how the concept can aid population health research and help us work toward a healthier future. Here, Mendenhall answers questions about how this series came to be, and the effect she hopes it has on the field. 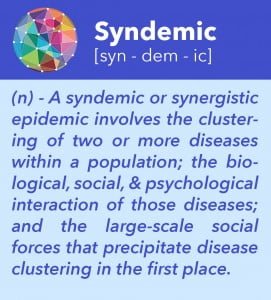 When you consider the concept of a syndemic, you can think about it at two levels, the individual level or the population level.

First, if you’re a clinician, you think about it at the individual level. The concept of the syndemic is similar to the concepts of co-morbidity or multi-morbidity, but it takes seriously social conditions. One of the easiest examples is HIV and tuberculosis. What drives the link between these two infections? Poverty, low social status, living conditions, and the immunosuppression of HIV increase a person’s risk for activated TB and worsen their overall health.

Then, there’s the broader, population level. Epidemics don’t exist in isolation. Across populations, especially among impoverished groups, you see the clustering of two diseases together. This clustering almost always corresponds with structural and social issues such as inequality, poverty, social violence, stress, family distress, and immigration. Understanding the link between structural/social issues and disease can help us better predict where syndemic experiences are likely to occur and figure out how to approach them at the population level.

When you think about a syndemic you think about (1) the clustering of disease, (2) the biological, social, or psychological interaction between  diseases, and (3) the social drivers that precipitate clusters within socially and economically disadvantaged populations.

Why is it so important for people to study syndemics?

Clinical medicine is siloed, public health is siloed. In order to move beyond this problem we have to understand that disease itself is not isolated from other social and health conditions. Syndemics require us to look beyond a singular-disease experience, devoid of social factors — because that is not the reality of how people experience health. In anthropology, we talk about the difference between disease and illness: disease is a physical experience and illness is a social experience. 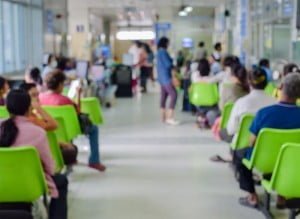 My research on diabetes in India, Kenya, South Africa, and the United States reveals that diabetes presents very differently both socially and biologically in different contexts. For instance, in Soweto, a township of Johannesburg, South Africa, the profound social and medical effects of the AIDS epidemic influence how people perceive diabetes. In this context, social stigma around AIDS couples with diabetes — two common conditions that require routine medical care-seeking. This is in part due to decades of faith leaders trying to dispel AIDS stigma by saying “It’s just the same as diabetes!” When we frame health conditions with a single inflexible definition across different contexts, we really miss the whole picture. This leads to misdiagnosis and the poor implementation of care. People’s lives are very complex and our understanding of disease expression needs to take that into account.

Initially, I was writing my dissertation on embodiment. I was thinking about how trauma became embodied in women’s depression and diabetes. I sent a chapter to my friend, medical anthropologist Kenneth Maes, who is at Oregon State. Kenny read it and said, “You are working on syndemics.” I wasn’t familiar with the term — I had never been introduced to syndemics in graduate school. After that, I read everything Merrill Singer wrote on syndemics and anything else I could find on the topic. I thought, “That is exactly what I’m doing, I’m working on syndemics.”

At the time, not a lot had been written on syndemics and non-communicable diseases or diabetes. But the idea made a lot of sense. Especially for depression and diabetes, where there are acute biological, behavioral, and social interactions.

How did you get the idea for this series of articles in The Lancet?

Richard Horton came to Georgetown for a commision on global health law for The Lancet hosted by two leaders on campus, Larry Gostin and John Monahan. Every year my department hosts a lecture on global health, called the Maloy Distinguished Lecture. I emailed Richard and said, “Would you give this lecture to my group at Georgetown, and have dinner with my students?” Richard Horton is a really gregarious, kind, excited kind of person. He agreed to participate, and I was thrilled.

When he came to our meeting, we had a fantastic conversation about syndemics:  What they are, where they come from, how I saw them affecting global health. We talked for an hour and at the end he said, “I want you to lead a series of papers on syndemics.”

I went straight back to my office to write a three page proposal for how I envisioned the series. That afternoon we had the planned lecture and follow-up  dinner. On his way out I handed him this proposal and said, “Well, don’t forget, here’s a proposal for the syndemic series.” He smiled and laughed but later followed up to say, “let’s do this.”

What has the response to these articles on syndemics been like?

Many people think it’s a new idea, but Merrill Singer has been working on it for two decades. He has put so much intellectual thought into this pursuit. He’s devoted his career to understanding how we can deconstruct the embodiment of suffering to understand what it looks like.

In graduate school, Peter Brown (of Emory University) told me that if you take an idea out of one discipline and introduce it to a new discipline, people might just think it’s really innovative and novel. I believe that taking this concept from anthropology and introducing it to a broader public health audience is important because it opens up the audience of people who might engage with and use the concept in policy and clinical medicine.

Is there anything else that you want population health researchers to know about syndemics?

I think the concept of syndemics could be a tool for researching and influencing public policy in order to better integrate social policy with clinical medicine.  For example, syndemic-driven research could help us answer questions such as, how will better housing affect HIV patients? There is strong evidence that housing affects TB, HIV, and diabetes. And diabetes increases your risk of getting tuberculosis by threefold. This concept moves beyond the social determinants of health; it’s a way of looking at clusters of disease with the goal of informing social policy.

These links between diseases are powerful. As non-communicable diseases start to affect low-income communities worldwide, like the peri-urban settlements or slums where I work, there are already high rates of infectious disease. It’s important that we take syndemics seriously and start aggressively implementing health interventions in the form of social interventions that address the structural drivers of syndemic clusters in an holistic way. We need to provide clinical care that addresses all people.

In almost every place where I work — in India, South Africa, Kenya, as well as the United States — people go to one specialty clinic for their diabetes, they go to another for HIV, another for tuberculosis and yet another for mental illness. As a result, they’re getting disjointed medical care. It is imperative that we move to a more person-centered care model.

What other articles would you recommend to a population health researcher interested in learning more about syndemics?

A dose of drugs, a touch of violence, a case of AIDS: conceptualizing the SAVA Syndemic. Merrill Singer. Free Inquiry. 1996; 24(2). 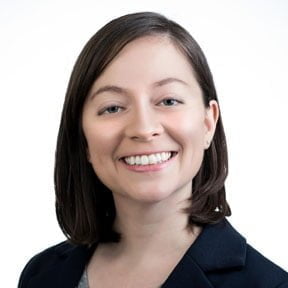