Population Health Goes to Austin: A Preview of the October Conference

From October 2-4, population health scientists, practitioners, and stakeholders will convene at the University of Texas-Austin, for the third in a trio of population health conferences that have been generously supported by the Robert Wood Johnson Foundation.  Improving Population Health: Now, Across People’s Lives, and Across Generations to Come, will feature a host of keynote speakers, scientific panels and other activities aimed at generating solutions for improving population health and fostering a culture of health in the U.S. 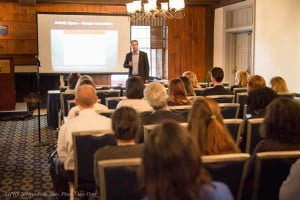 This conference series has grown exponentially since the first one day meeting with at the National Academy of Sciences, Engineering and Medicine. Participation in the 2017 conference has far exceeded expectations and all previous records.  Submissions increased three-fold from the previous meeting and expected attendance has nearly doubled each year.  We expect approximately 360 participants in the 2017 meeting! Although the conference currently has a wait list for more attendees, meeting co-chairs Michelle Frisco and Dorothy Daley are still working hard to make room for as many people as possible.  The rapid increase in the demand for these conferences bodes well for the conference series and the health of IAPHS!

The conference agenda, which can be found here, features four keynote panels:

In addition, twenty-eight scientific sessions over the three-day conference will feature research on population health topics.  A sampling of the offerings includes Population Health & Genetics; Health Disparities; Child Vaccination Coverage; Cultural and Structural Racism; Sleep as a Determinant of Health; the Role of Community Health Workers in Addressing the Social Determinants of Health; Multisector Collaboration; Intellectual Homes for Interdisciplinary Population Health Research; LGB Health; and Immigrant Well-being. The program also includes a poster session, a reception, and many opportunities for networking.

If you are not attending the conference, you can follow IAPHS on Twitter (@ia4phs) to get the latest news. The meeting organizers and IAPHS will be providing meeting highlights while the conference is underway!   IAPHS will also provide more in-depth post meeting analysis highlighting important insights from this year’s conference agenda. Stay tuned for more!