Reflections on IAPHS: An Interview with President Sandro Galea

Sandro Galea, Dean and Professor at the Boston University School of Public Health, became the first elected president of IAPHS last February. With his term as president ending next month, we asked him to share his thoughts about IAPHS.  Chris Bachrach, Executive Director, sat down with him for a brief conversation.

Chris: Sandro, you took on the presidency of a young and almost-unknown association.  Why did you do it?

Sandro: I think IAPHS is the right association at the right time.  IAPHS is filling an important niche and I was excited to be a part of building it.  But I realized that the work this required in its first year would not be glamourous – we needed to create the mundane structures IAPHS needed to sustain it over the coming years and decades.  Somebody had to do this, and I was glad to take it on.

Chris: IAPHS is one of many health organizations – what makes it unique and/or important?

Sandro: IAPHS does two things that set it apart from other health organizations. First, it takes population 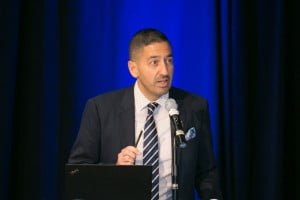 health science as its central focus. And second, it sees its primary role as promoting science and nurturing the next generation of scientists.  This is something I feel passionate about.  In my own career I have had the great privilege of working with exciting young colleagues, many of whom have emerged as leaders in their own right.  And the positions I have held – department chair, now dean – carry with them responsibility for these emerging careers.  So it is very important to me that IAPHS sees this as part of its core mission.

Chris: What is your proudest accomplishment as IAPHS’s first elected president?

Sandro:  IAPHS is still here! And it is on solid ground for moving into its next year and the years after that.  There is a significant risk for hatchling organizations to fall out of the nest. I have been part of a great team that has attended to what the organization needs – establishing best practices for governance and management; developing a case history of problem-solving; putting the pieces in place for next year’s conference and other future activities.

Chris: You’ve been a key leader and proponent in population health science. What is your view of the field and where it’s going?

Sandro: It is an exciting field that is evolving rapidly.  It is interdisciplinary by definition, and that makes it intellectually interesting.  The challenge is finding a coherent identity that allows it to nurture scholars who identify as population health scientists while at same time maintaining the breadth of exposure to different disciplines.  The need for this balance is why IAPHS can play such an important role: it can help to create identity without raising new disciplinary walls.

Chris: Thank you Sandro, for leading IAPHS in its first year as a membership organization, and for all you have done to set a strong course for the future.  All of us on the Board are happy that you’ll stay with us as Past President in 2018.